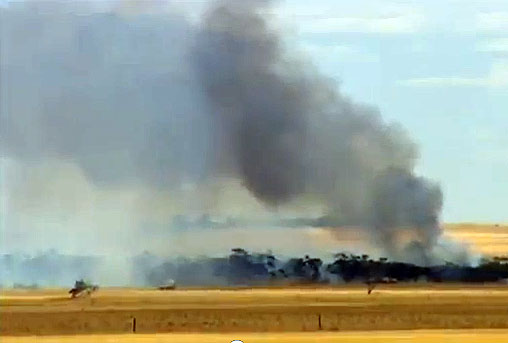 ALL rural districts have been harshly reminded that bushfires are a major part of our lives.

How could our elected governments even remotely consider putting this fragile and potentially lethal high fire risk environment at greater risk by approving the construction of hundreds, if not thousands of industrial wind turbines on the top of our ridges and hills?

Wind farm proponents, owners and hosts will all tell you verbatimly that wind turbines pose only a “minimal fire risk”.

Do not misunderstand that this risk, albeit “minimal”, is on top of the already high fire risk, not instead of.

Why is it that common sense goes out the window when the almighty dollar knocks on the door.

Nowhere else in the world are wind turbines built in conditions like ours.

At the moment for example, the Boorowa Shire is confronted with applications from at least three wind farm proponents.

They would like to site approximately 300 turbines ranging in height from 150 metres to 180m. These towers will be placed on top of 40 to 50m high ridges making them overshadow the inhabitants who live and make their living in the valleys below by 200 to 250m. (The Harbour Bridge is 138m from the water to the top).

Planes and helicopters are a major weapon used to control a bushfire and give support to ground crews.

The wind farm proponents brush aside any suggestion their turbines may be a risk to these pilots by saying they will simply shut the turbines down in a fire event.

Obviously pilots cannot nor should not risk death by flying into a nine tonne, 60m smoke-shrouded blade somewhere below them, whether it is moving at 260 kilometres an hour on not. For their own safety, fire crews will need to set up outside the wind farm by as much as 1km to get support.

Allowing a fire a 1km chance to escalate will increase its potential to destroy property and life.

The increased risk will result in increased insurance premiums and claims. Wind farm owners, hosts and neighbours will have to pay the price.

The owners and hosts can use their profits and rental income to cover this additional expense, but the neighbours will be left out of pocket or uninsured.

Owners, hosts and government who have granted approval to create this problem will no doubt find themselves defending damages claims brought on by affected parties and their insurance companies.

This letter and other forms of warning have put the potential defendants on notice. They would be fool hardy to ignore it.