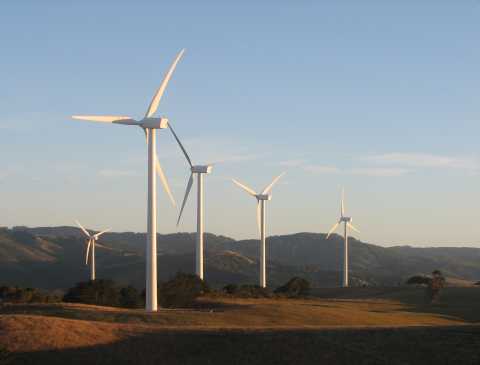 1) Wind turbines are machines that are prone to mechanical failure.

2) When they fail they can Cause Fires and throw oil and debris for hundreds of metres.

3) Wind Turbines have a height of 155m and spin at 300km/h, therefore helicopters and other aircraft used in fire suppression cannot fly around them.

4) The power transmitted by these generators is carried by above ground transmission wires, that are the cause of bushfires in high wind situations. As was the case on Black Saturday and on numerous other occasions in Victoria’s history.

My argument is that, in Victoria, these generating facilities should not be constructed in fire prone areas, or next to forested areas. Particularly one such as Macedon Ranges where the location of the proposed Sidonia Hills Wind Farm is located north and north west of Mt Macedon and the heavily forested Cobaw Ranges. The location of the proposed wind farm to the north and northwest of these forested and populated areas is significant as the prevailing winds on catastrophic bushfire days is from these directions.

On February 7th 2009, the most devastating fire in the area began in Redesdale and stopped in Sidonia, due to a wind change. If conditions similar to these occurred again, and one of the 450 foot high wind turbines started a fire, what hope would there be in 1) fighting a fire without helicopters or planes, or 2) keeping it out of the Cobaw forest, Newham and then Mt. Macedon?

There are currently plans to construct 34 turbines in Sidonia and 50 turbines in the McHarg Ranges? With the wind, smoke, and 450 foot turbines rotating at 300 km/h the CFA would have been unable to use water bombing aircraft.

If a machine has a catastrophic failure, it would have added to the complexity of the fire as these devices cannot be extinguished, all you can do is stand around and put out the fires that are started by the flaming oil and debris. This flaming debris can be thrown 500 metres away from the turbine, possibly even more in high wind situations.

There have been no finalised plans, however the above ground power lines for the Sidonia project are planned to go through the remnant vegetation of Gooch’s Lane, parallel to the Cobaw State Forest.

We should act now to demand that our politicians understand the true impact of these turbines on the fire behaviour and the possible loss of life and property in this area. If this situation should ever occur, we need to know who should be held accountable for allowing this risk to be foisted upon an unwilling and unwitting community.

The following links demonstrate the tendency for these generators to cause fires within Australia and overseas:

March 6th 2009 Noble New York. The Altona wind energy facility which went on line in early 2009 lost a turbine due to collapse. The project consists of 65 GE 1.5 MW turbines. No explanation for the collapse has been released. The turbine caused a fire when the nacelle hit the ground. New York State failure

December 2nd 2008 Nebraska.  A 262 foot wind tower northwest of Bloomfield Nebraska burst into flames. Officials say three men were injured in the fire. One was sent by Life Flight to Sioux City with extensive burns.

February 27th, 2007 Dodge Centre, Rochester US (this article no longer available but here is the text)

DODGE CENTER — A wind turbine near Dodge Center lost one of its blades Friday night when lightning struck it and started a fire.

The Rochester Fire Deparment was called to the fire because it had the closest long-ladder truck. Its 100-foot ladder was used to help extinguish the fire at 11:15 p.m.

One rotor blade was lost, but fire officials were uncertain if the fire reached the generator portion of the device, which could compound the loss.

October 2006 Taiwan due to an overheated generator