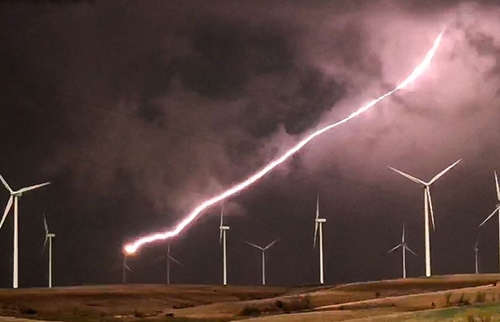 In the current issue of North American Clean Energy, a huge, tabloid-sized glossy magazine for the “renewable” energy sector, is an article titled “Taming Turbine Fires Before They Start.” Here are some excerpts (the article is not online yet). Any emphasis is ours.

“According to reports, the cost of a fire that damages or destroys a wind turbine can be as much as $2 million. Property damage to the turbine, and nearby areas, from fires reported in the past decade ranged between $750,000 and $6 million.

Aside from the imminent hazards of a burning turbine, there is also the risk of sparks, embers, or debris falling to the ground and setting off a wildfire due to the remote location of many wind farms. Even if a turbine is not fully burned or damaged, or a potential fire doesn’t spread to the surrounding coutnryside, costs can be considerable. … Turbine fires —and particularly, those that spread—should be a significant concen, affecting the planning stages of any project. To this avail, permitting might be a more drawn-out, costly, and time-consuming process. … But what are the fire risks associated with wind turbines?

Technical equipment and combustible material are concentrated in the nacelle and, once a fire starts in a turbine, it can be fuelled by up to 200 gallons of hydraulic fluid and lubricants. The nacelle itself is constructed from highly flammable resin and glass fiber, and internal insulation can become contaminated by oil deposits, adding to the overall fuel load.

The most common cause of a turbine fire is a lightning strike—a risk that is heightened by the installation of taller and taller wind turbines. Turbines are now being built that are up to 320 feet high. They’re frequently sited in exposed and high-altitude locations. Globally, there are around 16 million lightning storms and approximately 1.4 billion lightning flashes every year. However, only 25% of these are cloud-to-ground. … Recently, a wind turbine caught fire as a result of a lightning strike. Burning parts of the rotor blade, which had been struck, fell and caused a secondary fire in the nacelle—all at a cost of $200,000 and 150 lost days of operation.

Mechanical failure or electrical alfunction can also trigger a fire as capacitors, transformers, generators, electrical controls, transmission equipment and SCADA (supervisory control and data acquisition) systems all have the potential to catch fire. … Overheating can cause hot fragments of the disk brake to break off, rupturing hydraulic hoses, and resulting in the highly combustible hydraulic fluid being expelled under pressure and coming into contact with the hot disk brake fragments. Hydraluic pumps and connections can also fail, allowing the fluid to erupt into flame when it comes into contact with a hot surface.

With the fire risk becoming greater as more turbines come into operation, the National Fire Protection Association (NFPA) [in the U.S.] has added wind turbine and outbuilding fire protection standards to NFPA 850 (“Recommended Practice for Fire Protection for Electric Generating Plants and High Voltage Direct Current Converter Stations; 2010 edition). This provides fire protection recommendations for the safety of construction and operating personnel, physical integrity of plant components, and the continuity of plant operations.

…Wind farm fires do happen and many in the industry suspect that they occur far more frequently than statistics suggest. This is because a significant number of turbine fires go unreported due to their remote location. [Editor: NOT in Ontario.] … Hardly surprising, many insurers are becoming increasingly concerned, and the opnion of many can be summed up in the following statement: “Fire. It’s not a matter of if, it’s a matter of when.” Better safe than sorry.”

The author, Scott Starr,  is director of marketing for Firetrace International.

Question: Is Ottawa ready for a fire in an industrial wind turbine, especially in turbines that will be higher than any in North America?