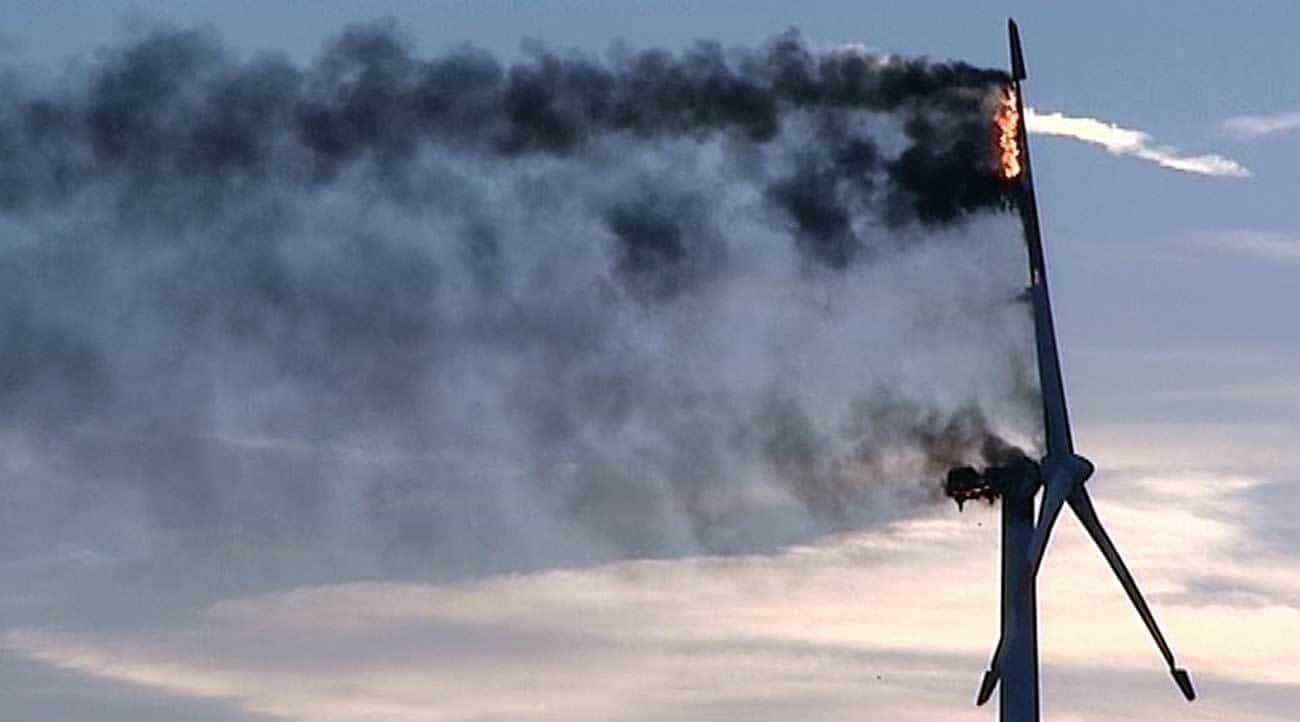 Many of us have expressed our ongoing legitimate concerns about the fire issues with respect to turbines, which include the following:
1. Currently no restrictions on operations of turbines on days of high, extreme or catastrophic fire danger
2. Fire fighters can do nothing apart from put out spot fires on the ground – (turbine fires are electrical fires, and hoses can’t reach anyway if the fire is in the nacelle)
3. If the burning turbine’s blades are turning, which can happen if the turbine has gone into catastrophic failure (Starfish Hill, November 2010), fire fighters are instructed to stand well back, in that instance 1km away from the burning turbine. What about the houses with people (eg children, elderly, disabled) in between
4. Loss of aerial fire fighting support for ANY fires, whether turbines are operating or not, and whether the turbines are involved or not, as the water bombers are restricted with how close to the turbines they can fly (due to wake turbulence from the turbines).
5. No mandatory requirement for automatic fire extinguishers to be attached to all turbines, despite the technology being available
6. Turbines are increasingly being put in some fire prone areas
So, not only is there a markedly increased risk of fire occurring once turbines are installed because of the highly flammable oil in the gearbox, there is a reduced capacity to fight it.
Nor does this include the electrical fires which start in the cabling (most recently in ground cabling at Waterloo in SA)

As it is coming up to bushfire season for many of us, it might be time to bring the decision makers’s attention to this issue again.
(Ministers responsible for fire, and all branches of the CFS, the media, relevant Insurers, whoever else you can think of).

They cannot then say they were not warned, when the inevitable happens.
There are obvious direct health implications (burns, asthma, mental health sequelae after a bushfire including depression, Post Traumatic Stress Disorder and Anxiety disorders)
All the more reason to site turbines carefully, to minimise the risk.

1. Fire at Lake Bonney, in the South East of SA 22nd January 2006 (http://www.windaction.org/pictures/1527)
According to a local volunteer firefighter, things could have been quite different had it not been for a timely last minute wind change.
2. Cathedral Rocks, on Eyre Peninsula SA 2 February, 2009 (http://www.abc.net.au/local/stories/2009/02/04/2482542.htm)
(noticed by a fisherman out to sea, who raised the alarm). Fire was reported to have started at night.
3. Fire at Starfish Hill, Cape Jervis, SA November 2010 (http://www.wind-watch.org/news/2010/11/20/cant-fight-the-fire/)
This fire followed a couple of weeks of the turbine spinning out of control as it had gone into catastrophic failure, with its air braking mechanisms completely failing. A local resident reported that it had been making “clunking” sounds for months, but that nothing was done by the company. Eventually it caught fire, and then subsequently collapsed completely.