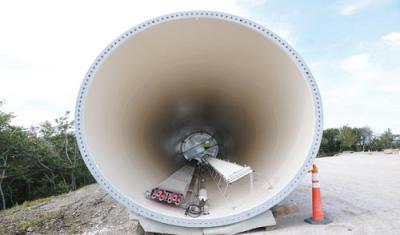 Some time ago, before the start up of the wind turbines of the Hoosac Wind Project, I tried to warn your readers of the potential terrible effects that the spinning blades would cause to the health of surrounding area residents and children attending the Abbott Memorial School in Florida.. This is coming to pass among those few that I have been speaking with. They have complained of sleep interruptions, palpitations, tinnitus, and headaches. These are the early symptoms of a long list of ailments, termed Wind Turbine Syndrome caused by the acoustic energy produced as a waste product by the turbines.

But something even more emergent, something that I hadn’t anticipated, has occurred. A large pool of an oily substance has been found on the ground a couple of hundred feet from the base of wind turbine #10 on Bakke Mountain, Florida. It was discovered back on Christmas by a Clarksburg resident, whose name will be withheld for the moment. I believe he even sent you some photos that he took of it.

This same person informed me that he reported the spill to the Department of Environmental Protection (DEP), a state agency that is charged with dealing with such things, on Christmas Day. He further brought the matter to the attention of the Town Administrator of Florida, Ms. Christine Dobbert, requesting that she notify the responsible agents and agencies in that town to deal with the problem. He was met with anger and confusion, screamed at and verbally assaulted, and presented with self contradictory irrational excuses as to why he was out of line.

To this day, January 10, 2013, NOTHING HAS BEEN DONE BY ANY STATE OR LOCAL GOVERNMENT AGENCY TO CLEAN UP THE OIL SPILL. Please understand that large wind turbines are known to contain a volume of ninety-five gallons of lubricating oil held aloft in the nacelle, to which the blades are attached, to bathe the gear box, much like your car must have its compliment of oil to lubricate its moving engine parts.

The great fear that was expressed to me was that the leaking wind turbine is situated directly above the homes in Clarksburg and these folks get their drinking water from wells that receive the runoff from the mountain. A cascade of water coming off the mountain has been described to me. Perhaps some readers may think me over cautious, but I advised this individual to stop drinking the water from his tap, switch to bottled water, and to keep a good record of his costs for purchased drinking water, as a precautionary measure. I would suggest the same practice be observed by all Clarksburg and Florida residents who get their water from this watershed.

Just today, I advised this same Clarksburg resident to call the NATIONAL RESPONSE CENTER; 800-424-8802. This is the emergency contact point for the federal Environmental Protection Agency (EPA). The gentleman did , indeed, make the call and was issued a File Number and told that an agent of the EPA would soon be in touch with him.

IT IS OUR HOPE THAT EVERY DROP OF THIS OIL SPILL WILL BE CLEANED UP AND REMOVED BEFORE IT GETS A CHANCE TO POISON THE WELLS OF THE AREA.