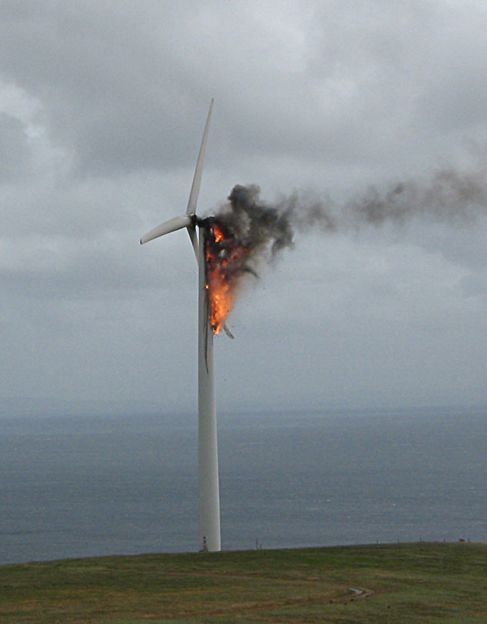 CAPE JERVIS – Do you call the CFS in the event of a wind turbine fire?

While it might seem like the right thing to do, according to group officer for the Southern Fleurieu CFS Mr Greg Crawford, there is little to nothing the CFS can do in this situation, as officers found out at the weekend.

Last Saturday at 2.33 pm, the Southern Fleurieu CFS group was alerted to a fire at the Starfish Hill Wind Farm, near Cape Jervis, in which a turbine had caught alight.

On arrival, CFS officers could do little but watch the blaze from half a kilometre away, as the situation was deemed too dangerous to approach.

“There was not a damn thing you could do about it,” said Mr Crawford of the turbine fire.

When Work Safe arrived to the scene, CFS officers were told to retreat a further 500 metres away from the fire, as the blades continued to spin.

“There were tips of the blades flying some distance,” said Mr Crawford.

“You could go no closer than a kilometre away.”

CFS officers kept watch for spot fires, but were unable to extinguish those close to the turbine.

Water cannot be used to extinguish the cause of a wind turbine fire, as the turbine’s hub contains a large electrical network and from ground to blade tip, the turbines stand at 100 metres tall.

In the event of a wind turbine fire during the fire season, aerial support could aid CFS by extinguishing fires caused by embers around the turbine.

Mr Crawford said the Southern Fleurieu CFS Group had received a bulletin from management detailing that little can be done in the event of a wind turbine fire due to the threat it poses to officers.

He said the Southern Fleurieu CFS Group is in ongoing discussions with the regional CFS officer and representatives from Starfish Hill Wind Farm on the issue.

A spokesperson for Transfield Services Infrastructure Fund, the organisation in charge of Starfish Hill Wind Farm, said the company has a huge emphasis on safety.

He said a Work Safe team are on site, monitoring operations closely and all safety measures are in place.

“As far as I’m aware, all safety precautions were taken (during the incident),” said the spokesperson.

He said the blades have now been clamped and the safety risk has been significantly alleviated.

Southern Fleurieu resident Barry Webb captured a photo of the destroyed turbine on Sunday and said he, along with many, have concerns of the high danger risks a turbine fire could pose to communities.

“They (wind turbines) are normally located in areas that are not easily accessible (to emergency crews),” said Mr Webb.

“The situation has the potential to be quite serious.”

The Starfish Hill wind turbine fire is the third in South Australia since 2006, with a blaze at the Lake Bonney Wind Farm in January 2006, and another at Cathedral Rocks Wind Farm, Port Lincoln in February 2009.

Both occurred during peak fire season.

A spokesperson for the District Council of Yankalilla said while council can provide advice to landowners concerned over the issue, the Starfish Hill Wind Farm is not council’s responsibility.