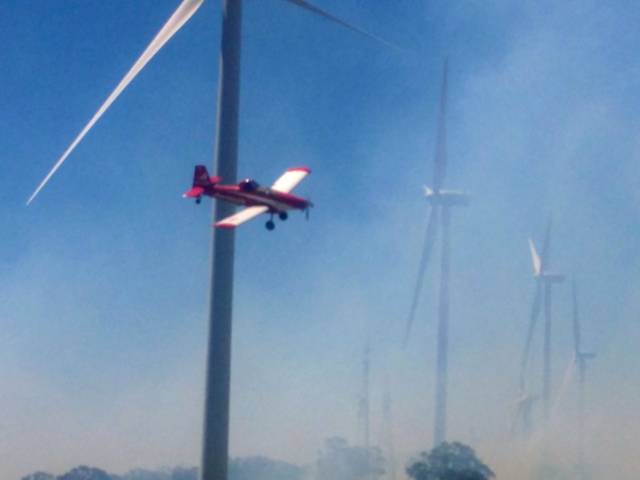 The green tinge on pastures can be deceptive out past Tarago.

Beneath the grass on which stock are grazing again lie layers of ash. Beside the road, trees carry the black scars from the massive Currandooley fire a year ago.

On January 17, 2017, now dubbed ‘tinderbox Tuesday’ by locals, a blaze sparked at Infigen’s Capital Wind Farm on Taylors Creek Road, ripped through almost 3400 hectares, over the Bungendore Road, on to Mount Fairy and down to Boro.

The RFS found that a bird striking the wind farm’s high voltage power line caught alight, dropped to the ground and set off the fire.

One year on, the day remains fresh in the minds of many. Some gathered at Tim De Mestre’s home, Merigan, 14km from Tarago on the Bungendore Road on Tuesday night for a catch up and reflection. Mr De Mestre’s 950ha property was the worst affected with most of his pasture burnt, along with 4000 pines and 3000 natives planted as windbreaks, a large oat crop and 30km of fencing.

Dr Michael Crawford was one of the people attending Tuesday’s get together.

Speaking on Monday, the Tarago district resident said while people had got on with their lives, in some cases it had caused “significant disruption.”

“They’ve lost fences and stock and it all takes time to replace which otherwise would have been spent living their lives rather than recreating it,” he said.

“There are people who have suffered materially, including one who lost a house and precious mementos that will never be recovered.”

Dr Crawford said anger lingered about the alleged cause and it was not a “forgive or forget thing.”

Infigen has denied any liability. A spokesman previously told The Post the company would cooperate with any future inquiry.

The NSW Coroner’s office is yet to formally decide whether to hold an inquiry. Police and RFS investigations have been forwarded to the office for consideration. Goulburn MP Pru Goward also called for such an inquiry last year.

A spokesman for the Coroner’s office said the matter was listed for callover on March 27.

Meantime, Dr Crawford says one of the main issues is what the RFS and State Government is “doing or not doing about wind farms.”

“There is a real question about how fireprone wind farms are to areas,” he said.

“There is research to show that the atmosphere close to the ground (near windfarms) changes temperature, bringing down warmer air and affecting moisture content in vegetation growth.

“…It’s reason to ask the RFS and government, ‘what have you done to understand the effect of wind farms on fire risk’. I’ve lodged a (freedom of information) request on this but have had no response but I expect they’ll say they’ve done nothing.”

Dr Crawford argues it’s incumbent on authorities to absorb this research and inform the community if there is an enhanced fire risk.

Some 38 landowners have joined a class action mounted by Warrnambool-based, Maddens Lawyers. Partner Brendan Pendergast said the firm was claiming in a Supreme Court action that the high voltage line’s design and configuration “gave rise to the ongoing problem of bird strike and that there were other incidents of birds being incinerated at the site.”

It is also claiming that greater vegetation control, implemented by Infigen after the fire, could have mitigated the risk.

Mr Pendergast said the amount claimed by the litigants was confidential at this stage.

“A significant number of people had their lives profoundly impacted both personally and with their enjoyment of the land and farming operations,” he said.

“One particular impact was the loss of amenity on beautiful rural lifestyle properties and complete stands of vegetation wiped out.

“It completely changed the landscape and it’s very difficult to get through that and look to the future.”

Mr Pendergast said some effects, such as erosion and dam siltation, had only become apparent after the fire.

While some of those affected were coping well, others had suffered psychologically.

“The financial impact is something that will take years to recover from. There are people in this action who are struggling,” he said.

The matter is listed for mediation before former Federal Court judge Ray Finkelstein on February 6 in Melbourne. The previous December mediation date was vacated.

The session is a compulsory step in the process and is designed to reach a resolution before trial.

One year on, South East Local Land Services is also reflecting on its role.

Asked if LLS had taken any experiences from the event, Mr Garner said it had been a good learning curve.

“We had a relatively new team in place and this was the first major fire we’d participated in,” he said.

“…This was a good test for the organisation and I believe we responded well with people on the ground early, responding to animal welfare etc and providing a good conduit to other organisations like BlazeAid, welfare and Community Health organisations.”

But he said managing and distributing donated fodder was something new and LLS had taken some lessons away.

“People are desperate at that time and you have to prioritise and match it to people’s requirements,” Mr Garner said.

Up at ‘Merigan,’ Mr De Mestre is still counting the cost of losing core breeding stock and kilometres of fencing.

The grass has come back but some windbreaks and grand old oak trees remain in a precarious state.