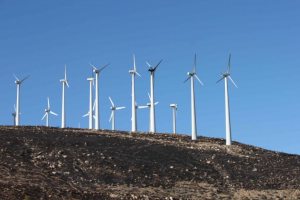 “Around 168 wind turbine fires have been documented. Some sparked brush fires and left some fire departments helpless to watch as oil in turbine components burned hundreds of feet in the air—out of reach of hoses—whirling burning debris across the landscape.”

July 31, 2012 (San Diego’s East County) – With County Supervisors poised to consider approval of Tule Wind and a wind ordinance that could open much of fire-prone East County to wind energy development, a wildland fire that started at a wind turbine facility in Riverside County last month provides fuel for opponents concerned about fire risks posed by industrial-scale wind projects.

Despite extensive area cleared around the base of each  turbine, Ewing said, the blaze still spread into a wildland fire that swiftly engulfed 367 acres. If not for prompt reporting by a witness, it could have been far worse.

According to Cal Fire’s report on the incident, The View Fire occurred in the Whitewater area east of Cabazon in Riverside County on June 17, 2012 at a wind facility near Cottonwood Road and Desert View. A caller who dialed 911 initially reported seeing flames and “one confirmed windmill on fire” at 9:15 p.m.

By 9:33 p.m., CHP stated it had received multiple reports that there were “several windmills on fire” along with a ridgeline near I-10 and Haughen-Lehmann Way. Callers also reporting “popping loud noises” as the turbines burned. Both ground crews and aircraft battled the blaze.

Residents in the box canyon were evacuated, including 90-year-old Barbara York, who had time to grab only an overnight bag. York was “frantic,” the Desert Sun reported at the time.

At 12:34 a.m. on June 18, Cal Fire’s report on the fire indicates that a request had been made for Edison, since power lines had caught fire in the middle of the wind turbines. More than 100 firefighters fought the fire through the night.

The blaze was ultimately stopped at 367 acres, including 100 acres of public lands on Bureau of Land Management property. The final report blames “equipment”, specifically a “generator” and “arcing” for the fire.