Source: https://www.eastcountymagazine.org
By Miriam Raftery
April 4, 2012 (San Diego’s East County) – Today marks the “International Protest Day Against Wind Power” with 765 websites participating.
A dark side of the wind industry that many media outlets have failed to report on is the thousands of documented cases of serious accidents. These include numerous documented cases of turbines falling over, blades flying off, injuries to workers and the public, and at least 99 reported fatality accidents.

Of the deaths, 67 were wind industry and direct supporters workers or small turbine operators and 32 were public fatalities.

How many tragedies have occurred worldwide is a well-kept secret within the wind industry. In the United Kingdom alone, however, Renewables UK, an industry trade association, has admitted to 1,500 wind turbine accidents/incidents in the UK alone during the past five years, the London Telegraph reported http://www.telegraph.co.uk/news/uknews/8948363/1500-accidents-and-incidents-on-UK-wind-farms.html. Those included 300 injuries and four deaths—in just one small part of the world.
A partial database of accidents , injuries and deaths through December 2011 has been compiled at the Caithness Wind Farm Information Forum: http://www.caithnesswindfarms.co.uk/page4.htm
According to the Caithness database, which estimates it represents only 9% of actual accidents (based on the RenewablesUK figures), an average of 128 accidents per year have occurred from 2007-2011, up from just 6 a year back in 1992-1996 due to the growing number of wind turbine installations.
Among the most grisly tragedies was that of John Donnelly, a worker killed in Oregon in 1989 when a lanyard that as supposed to prevent falls for turbine workers became entangled, dragging him into the spinning machinery.  According to Paul Gipe, an advocate of wind power who authored an article on fatalities, the medical examiner described Donnelly’s demise as death by “multiple amputations”, witnessed by a horrified coworker.
Another Oregon worker, Chadd Mitchell,  young father of two, was killed when a wind turbine tower he was in collapsed to the ground in Sherman County after the turbine’s rotor went into “overspeed,” the Oregonian reported on February 6, 2010. Siemens Power was fined for safety violations, and the family filed a lawsuit.
Other deaths have included electrocutions, falls, crush injuries, construction accidents, and a Minnesota man who was nearly cut in half by a chunk of ice knocked off a turbine tower in 1994. Three suicides have also been linked to turbines, including a worker who hanged himself, a parachutist, and a farmer who killed himself after neighbors protested a turbine he put on his property.
Caithness also has documented 221 separate incidences of blade failure, with pieces of blades documented to have flown over 1,300 meters—or 4,266 feet (4/5 of a mile). Blade pieces have gone through roofs and walls of nearby buildings.
At least 121 structural failures have been recorded too, including entire wind turbines that have crashed to the ground. The website www.windaction.org documents many of these. Turbines have crashed to the ground in school yards, near homes, roads and walking paths where only by sheer luck was no one underneath when the multi-ton structures collapsed. In the Palm Springs area, a turbine spinning out of control forced closure of a major highway. There are also concerns about many turbines still standing –where failures such as cracked foundations and sinkage have been observed. 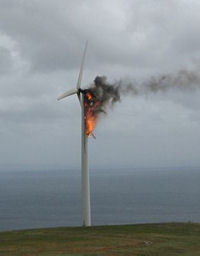 Around 168 wind turbine fires have been documented. Some sparked brush fires and left some fire departments helpless to watch as oil in turbine components burned hundreds of feet in the air—out of reach of hoses—whirling burning debris across the landscape.
There are also many instances of ice throws hurling chunks of ice off blades—94 times in 2005 alone. Another 93 transport accidents involving turbines have been reported, including one turbine section that rammed through a house and another that knocked a utility pole through a restaurant.
Disturbingly, EnergyBiz Magazine reported in its March/April 2011 edition that “More troubling for wind fleet owners and operators is that many turbines are coming off warranty. The end of last year marked the first time in U.S. history that more wind turbines were operating out of warranty than were covered, according to Wind Systems magazine, while many more are approaching the end of their warranties. Hidden costs of maintenance have climbed sharply, though some promising technologies may help reduce those costs, Energy Biz noted.
Still the issues raise troubling questions: who will be responsible for catastrophic failures when warranties have run out? Are local boards making decisions regarding turbine placement sufficiently educated on the risks? 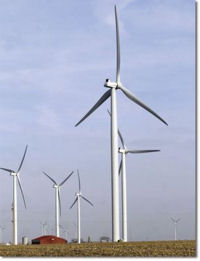 How far away from a wind turbine is a safe setback distance? Locally, some proposed industrial wind projects would place turbines within a half mile of homes, on up to three sides of the dwellings, in Ocotillo. In McCain Valley, Iberdrola’s Tule Wind proposes setbacks from roads of only 1.1 times the height of the turbine – or around 455 feet maximum.
In Kansas, Rose Bacon, a member of the Governor’s Energy Task Force, became so concerned about lack of teeth in regulations and vulnerability of inexperienced local officials in small towns facing proposals from international wind companies that she likened the scenario to the “wildcatter days in the oil business,” the McPherson Sentinel reported in 2005.
Below are some specific examples of serious incidents  documented through the above websites, where many more incidents can also be found.
A wind turbine crashed to the ground at a wind farm near The Dalles, Oregon in August 2007, killing one worker and injuring another, Associated Press reported.
While there are certainly many wind turbines that have never malfunctioned, the dangers cited above are real and have led many municipalities to adopt setback requirements from homes, roads, campgrounds, walkways, playgrounds and any inhabited buildings.
The wind industry has resisted setbacks, however. In Wind Energy Comes of Age, published in 1995, wind energy advocate Paul Gipe contends that setbacks of 500-1000 feet from residences are “more than adequate to protect public safety” and notes that in Europe, windmills have often been installed in places frequented by the public. Gipe insists that despite many accidents, the odds of being injured by a wind turbine remain less than that chance of being struck by lightning.
Setback distances vary widely. Some California communities use a multiple of size, such as three times the height of the turbine. Other areas have larger setback requirements. For instance, in Victoria Precinct, Australia, the government has adopted a 2 meter (1.24 mile) setback requirement for wind turbines to protect residents from risks of mechanical collapses.
In Brown County, Wisconsin, the Board of Health in January passed a resolution seeking emergency financial aid for residents near wind turbines who suffered serious health impacts including some families who abandoned their homes due to health concerns.

The Board called for adoption of the Wisconsin Citizens Safe Wind Siting Guidelines which would require setbacks of at least 2,640 feet from property lines, with further restrictions on shadow flicker, noise and other factors. Developers would also be required to submit a report with blade and debris throw calculations to protect public safety.