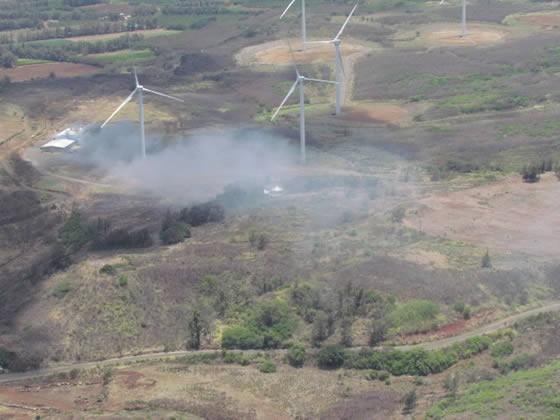 The fire at the Kahuku wind farm is contained but environmental concerns within the community have spread including to the North Shore where First Wind is building another wind farm.

There are eight turbines already up on Kawailoa Ridge about five miles from Haleiwa.  Eventually there will be 30 and some residents are concerned what happened in Kahuku could happen here.

Aerial shots over the Kahuku wind farm show the warehouse that was filled with 12,000 battery packs severely damaged and releasing toxic smoke and lead into the air.  Authorities say the nearest residences downwind were miles away and it’s very unlikely to pose a health risk.

First Wind is supposed to submit a cleanup plan to the state by the end of the day which will include samples of the air, soil and water.  The State Department of Health will review the plan and decide if it’s sufficient or if the state should do its own tests.

This was the third fire related incident at the Kahuku wind farm since it opened in March 2011.  The battery energy storage system was hailed as breakthrough technology but clearly there are flaws.

“This was the prototype and it was a great idea to smooth out the energy coming off the system. Unfortunately there had some serious technical issues with it,” said State Representative Gil Riviere, (R) North Shore Oahu.

The Kahuku fire has North Shore residents concerned about the Kawailoa Wind Farm which First Wind is building and scheduled to finish by November.

Lyons initially supported the project but is now worried.

“We have too much at risk over there, agriculture land, waterways, I mean some of this will spill over into Waimea Valley,” said Lyons.

However the plans for the North Shore wind farm will not use the same battery energy storage system that caught fire in Kahuku.  That’s comforting but still has some questioning if wind energy advocates were just blowing hot air.

Rep. Riviere goes a step further with concerns about the proposal that would send electricity from neighbor islands to Oahu via an undersea cable.

“If there was an intermittent problem or if the cable failed we would have serious problems if we were counting on that kind of energy,” said Rep. Riviere.

Once operational the Kawailoa wind farm is supposed to power more than 14,000 homes or about five to ten percent of the island’s power.  It will have 30 turbines compared to 12 at Kahuku.