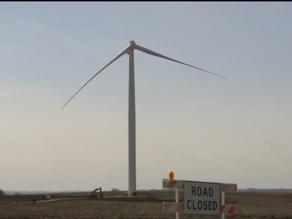 Something big is missing at the Eclipse Wind farm in Adair, Iowa – a gigantic wind turbine blade broke loose and crashed into a field.

On Friday, a technician discovered one of the blades – which are almost the size of a football field – on the ground instead of in the air.

Siemens Energy, the turbine manufacturer, is now leading a full investigation into the unusual incident.

Kathleen Law, president of the Iowa Wind Energy Association, said, “Wind farms are usually placed in agriculture areas, so they’re out in the rural parts of the states, there are laws that require the wind farms to be set back a distance from residences and occupied buildings.”

Law noted, “Things like this are very rare. We have about 4,500 megawatts of wind turbine electricity in Iowa, and that’s thousands of turbines in Iowa and this is the first instance I have ever heard of turbine blade coming off in Iowa.”

Siemens said in a press release that this has never happened before, and they’re not yet sure what caused the blade to snap off.

Each of the giant blades is actually under warranty, so while a team of experts is working to figure out what happened, the manufacturer is already working to replace the blade for its customer.