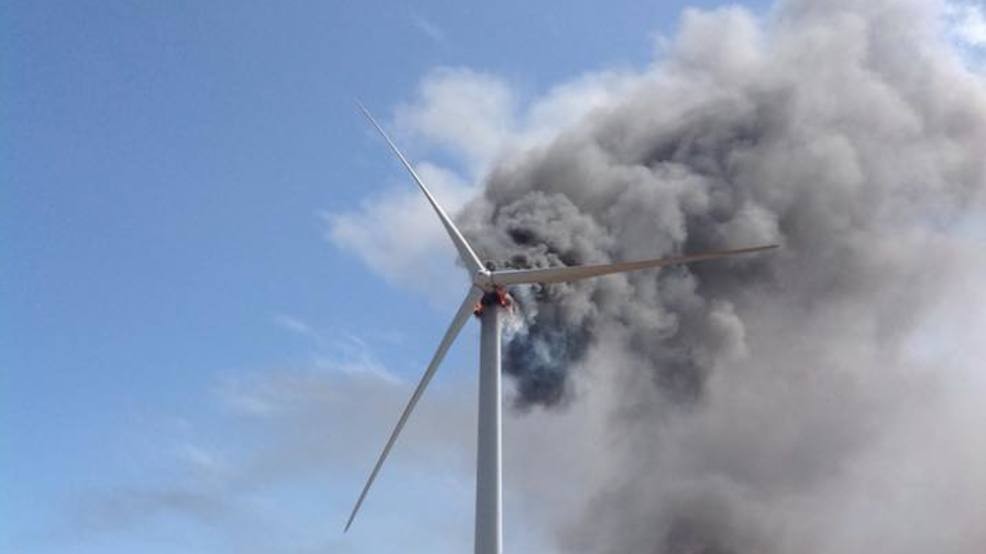 The answer is pretty clear when it comes to fires that make the headlines; impressive videos of fires burning out of control, toxic black smoke filling the sky, burning turbine blades, and other parts shooting through the sky are well documented worldwide. Perhaps the question we should be asking is, “What do we think we know?”

As it turns out, not too much. According to researchers at the University of Edinburgh, the numbers are grossly underreported by the wind industry. “Researchers carried out a global assessment of the world’s wind farms, which amount to an estimated 200,000 turbines. The team, from Imperial College London, the University of Edinburgh and SP Technical Research Institute of Sweden, estimate that more than 117 turbine fires take place each year.”1

Wind industry leaders tend to dispute this information, but there is currently no international regulatory organization requiring them to report turbine accidents and failure. There are, however, various organizations committed to tracking and reporting turbine accidents. Caithness Windfarm Information Forum in Scotland is one such organization. From 2000 through September 30, 2018 (the end of the third quarter of 2018) Caithness has reported 330 turbine fires, including 19 so far in 20182. Although lower than the 117 annually claimed by researchers at Imperial College London, the number is large enough to reinforce the need for regulatory oversight. Caithness derives information from accident reports, insurance documents, and news articles.

Why is accurate reporting of great importance?

Public safety. Industrial wind projects are often built in rural communities, on farms leased to wind developers by farmers, to boost their income. Setbacks from homes and other dwellings, property lines, and neighboring homes and properties are determined by local governments (these vary widely around the world). Toxic smoke from burning fiber composite blades, lubricating oils, and other turbine components are detrimental to the health of people and animals. Turbine blades are currently approaching 288 feet in length (again, composed of glass and carbon fiber composite). When older, fiberglass blades burn, they release tiny airborne particles, which are easily inhaled and deposited in the lungs, irritating the capillaries. Over time, this irritation leads to scarring that causes permanent damage. The National Institute of Occupational Safety and Health cites studies showing that these inhaled particles could damage cellular mechanisms and DNA, which could further promote the growth of cancer cells.3Similar problems arise when disposing of these blades at the end of their lives. Research found that, “Combustion of GFRP (glass fiber reinforced polymer) is especially problematic because it can produce toxic gases, smoke, and soot that can harm the environment and humans. Carbon monoxide and formaldehyde have been reported as residue from thermal degradation of epoxy resin. Another residue is carbon dioxide, which poses concerns regarding greenhouse gas emissions.”4

In California, exploded turbine blade pieces were reported to have flown 4,200 feet. Imagine this scenario with flaming blade debris. Further, due to turbine height, fire brigades are unable to reach the flaming gear boxes, nacelles, and enormous blades. Widespread flaming debris is also difficult to contain. Often, the only option is to stand by and watch these fires burn.

Destruction of property surrounding the turbine fire is not unusual, especially in dry, windy conditions. An example of this is the famous Australian fire of January 17, 2017; the fire resulted in the destruction of almost 3,400 hectares, or 8,401 acres. Included in the damage was a house, 300 hectares of pasture, 80 hectares of crops, 3 sheds, water tanks, and more. To demonstrate how simply a fire of this magnitude can be started, it was determined that a bird flew into the wind farm high voltage line, caught fire, dropped to the ground, and ignited the spreading fire.

It’s more common for fires to start in the turbines, due to either electrical or mechanical problems. Electrical causes typically result from transformer and power converter systems that arc around cable terminations made during manufacturing. Other electrical fires result from improper operations and maintenance practices.Mechanical causes are primarily a result of hydraulic brake systems and main shaft bearings that overheat; this tends to occur in high winds, during stormy weather, when the blades spin out of control and the brakes overheat and fail. Lightning strikes are a well-documented fire hazard. Not all lightning strikes ignite turbine fires. However, it’s conceivable that, as turbine bases climb higher and blades grow longer, so does their vulnerability to lightning strikes. The sparking with flammable fluids or vapor clearly poses a fire risk. With more than 80,000 turbines currently in operation5, turbine fires will continue to increase.

The industry has a long way to go in preventing, tracking, and reporting turbine fires. Everyone who lives in the shadows of these giant machines deserves protection to property, livestock, the wildlife, and surrounding fields and meadows. Burned out and rusting turbines not only mar the landscape, but also the reputation of a growing industry.

Suzanne Albright is a Founding Member and Principal of the Great Lakes Wind Truth organization. She is also Executive Member of the group Turbines on Fire.