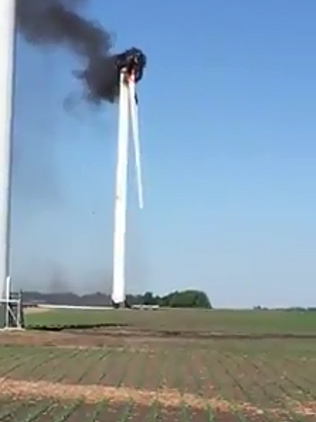 A wind turbine in northwest Iowa caught on fire and one of its blades fell to the ground as seen in a video captured by a resident early Monday.

Chief Deputy Kevin Wollmuth of the Osceola County Sheriff’s Office said the initial call about the fire was made around 4:30 a.m. Monday, where officers arrived at the intersection of 120th Street and White Avenue near the small town of Harris, about 220 miles from Des Moines.

Wollmuth said that the the Ocheyedan Fire Department arrived shortly after and handled the scene the rest of the way. No one was hospitalized or injured, Wollmuth said.

ExploreOkoboji.com reported Tuesday that the fire department made the decision to let the fire burn itself out, and that the cause of the fire was believed to be a mechanical malfunction.

But Bryan Garner, manager of communications at NextEra Energy Resources — which owns the turbine — told the Register that officials are still investigating the cause. He said the fire occurred in the nacelle of the turbine, where the generator and equipment is housed.

Garner called the incident “exceedingly rare,” and said, “I can’t recall the last time one of these situations has happened.”

“We’ll be working with the manufacturer to identify replacement parts and the cause of the fire,” Garner said.

Garner said the turbine in question is a 2.5 mega-watt Clipper turbine, located on the organization’s Endeavor I Wind Energy Center in Osceola County. There is a second Endeavor energy center also located in the county, both beginning operation in 2008. More information about the sites can be found here.

Garner said that NextEra monitors its turbines “around the clock” and that “we saw it instantly that it went offline.”

“This is one turbine out of 60 on the site, and it was the only one affected,” he said, adding that NextEra plans to make repairs in due time and that the rest of the wind farm is “fully operationally and generating electricity.”

Garner said that NextEra, which has more than 125 wind farms across the U.S. and in Canada, leases its land from area farmers.

“We always commit to leave the land in as good or better situation than when we found it,” Garner said.

Evan Vaughan, media relations and outreach coordinator of the American Wind Energy Association, told the Register that “wind turbine fires are very rare.” He said it’s the first turbine fire he’s heard of happening in a long time, but couldn’t provide a past incident.

“They operate under pretty harsh conditions being exposed to the wind on a nearly constant basis,” Vaughan said.

However, he explained that any industrial piece of machinery has a chance to break down.

“It’s quite remarkable that we have 52,000 wind turbines in operation in the U.S. alone,” Vaughan said. “You see very few of these fires. Wind turbines are very reliable.”

Greg Vellema, 18, of Harris recorded video of the fire. He told the Register in a Facebook message that his brother, a deputy with the Osceola County Sheriff’s Office, was the first responding officer.

“He called me thinking it was the turbines in our field, but it was actually across the road,” Greg Vellema wrote, adding that his brother sent him a photo once he got to the scene.

Iowa is a national leader in wind power with nearly 4,000 wind turbines in the state, per the American Wind Energy Association.

Last year, Iowans received almost 37 percent of its total power from wind, which equals out to 1.85 million homes powered by wind.