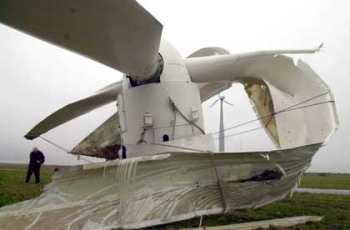 By Simone Kaiser and Michael Fröhlingsdorf

Wind turbines continue to multiply the world over. But as they grow bigger and bigger, the number of dangerous accidents is climbing. How safe is wind energy?

It came without warning. A sudden gust of wind ripped the tip off of the rotor blade with a loud bang. The heavy, 10-meter (32 foot) fragment spun through the air, and crashed into a field some 200 meters away.

The wind turbine, which is 100 meters (328 feet) tall, broke apart in early November 2006 in the region of Oldenburg in northern Germany — and the consequences of the event are only now becoming apparent. Startled by the accident, the local building authority ordered the examination of six other wind turbines of the same model.

The results, which finally came in this summer, alarmed District Administrator Frank Eger. He immediately alerted the state government of Lower Saxony, writing that he had shut down four turbines due to safety concerns. It was already the second incident in his district, he wrote, adding that turbines of this type could pose a threat across the country. The expert evaluation had discovered possible manufacturing defects and irregularities.