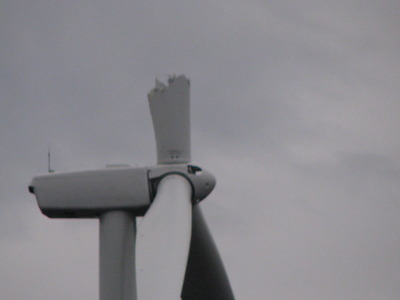 ORANGEVILLE, N.Y. — A 160-foot-long blade has broken off a turbine at a western New York wind farm, but no injuries resulted from its plummet to the ground.

Hunters tell WIVB in Buffalo (http://bit.ly/17eK5SR ) that it sounded like a cannon or thunderclap when the turbine blade broke off around 7 a.m. Sunday at the Orangeville Wind Farm in Wyoming County. They said they were about a half mile away.

Alissa Kinsky, a spokeswoman for in Invenergy wind power company, said the turbine blade broke during testing. The turbine is one of 58 installed at the wind farm last month.

Kinsky said all turbine operations have been suspended as a precaution and the company is working with General Electric, the turbine manufacturer, to determine what caused the accident.